Regarding set, props, and costumes for The Ugly Princess.  Over the last few weeks, I have been picking up, transporting, or even storing in my car, the following:

Here’s how the last one came about.

With this play, I threw caution to the wind.  It’s a relatively big cast (5 actors), it’s meant to take place in a dilapidated, but still-royal residence, the characters are wearing fairy-tale-like costumes, and ONE character is a vain, selfish clothes-horse — she has TWO costume changes in a one-act show.  The green dress is mine.  Our actress Mandy loves costumes and has no issue acquiring new items, so she found the blue dress and blouse at Value Village.  But — SPOILER ALERT — the script (and I wrote it, so yes, it’s my own doing) calls for the character to appear in a wedding dress at one point.  Even with scouring thrift shops and the web, anything I could find which was remotely appropriate was running into the hundreds of dollars.  Oh, I’m also producing the show. That is:  I’m the money.  Ha ha.

Then lightning struck: I found a wedding gown on Kijiji, being given away – FREE.  It was the right size, and it wasn’t hideous!  I told my co-workers, who speculated about why someone would just give away a wedding dress.  Hey, I’m a writer, but in this case I don’t care WHAT the story is.

As always though, there was an ever-so-slight catch. As with most things Kijiji, I would have to pick up the dress myself. I had also arranged to fetch the boxes from director Maria that night.  Here, in text messages with my production manager Adam, is how the evening went: 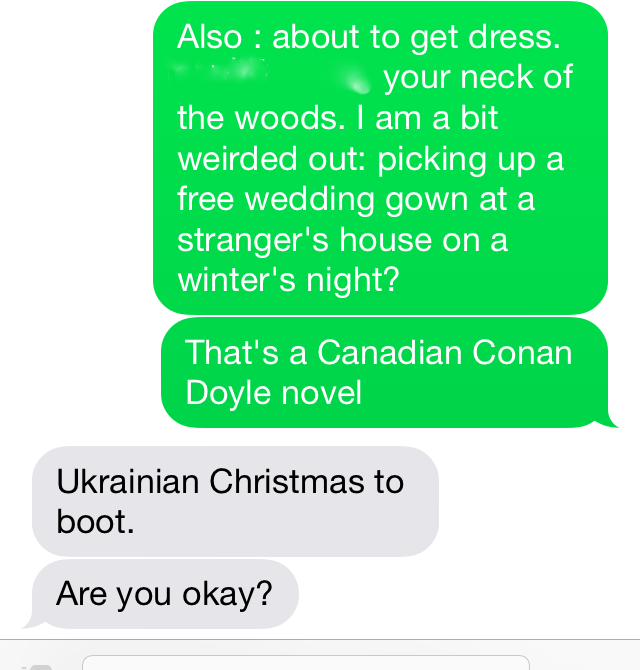 Here, I drove to the south end of town, which took about 30 minutes.

HE DID NOT CALL 911.  He told me later he called the complaints line!

Moral: every girl should have a stage manager who will flip out if she goes AWOL. But beware, he WILL flip out!